You can read the full set of forecasts as a PDF here.

This blog post is a recap of the most important data for commercial drone operators. All data is current as of April 2017.

This rule set provided a regulatory structure for the routine operation of small UAS for commercial purposes.

Based on trends and expert opinions, the FAA forecasts that the amount of Remote Pilots (those with the Remote Pilot Certificate with sUAS Rating) will likely grow to 420,000 by 2021.

This compares to 29,000 Remote Pilot Certificates that have been issued as of December 2016. This means there is huge projected growth in the volume of commercially certified pilots over the next 4 years.

The estimated growth of the number of Remote Pilots between 2016-2021.

As of February 2017, over 90% of individuals who took the remote pilot knowledge test had passed. This pass rate is only slightly higher than the private pilot test (~87%).

What does this mean for those thinking about becoming a Remote Pilot? Plan to take and pass the test ASAP!

Right now, there is barely any competition for commercial jobs. But within the next four years, the amount of certified operators will likely increase 10x fold! 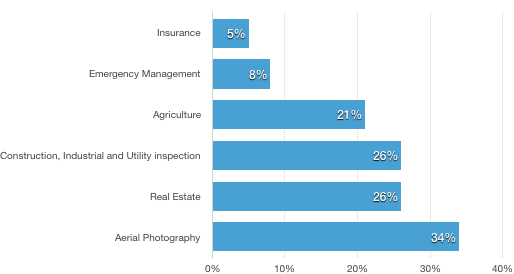 Major applications of small UAS commercial uses. Many of the sUAS have multiple uses, hence why the chart percentages exceed 100%.

We see with this data the vast majority of sUAS uses are for aerial photography and real estate.

This gives a fair assessment of where most drone operators have been focused on with their businesses, and where the opportunities for growth are.

There are many operating restrictions under Part 107, however, waivers can be applied for and requested.

Below is the breakdown for the top 5 waiver requests received by the FAA. The percentage of the chart exceeds 100% because of multiple requests at the same time. 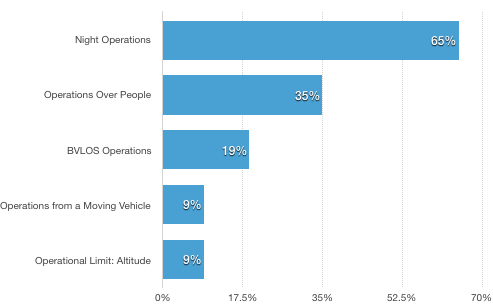 We see here that the highest requested waiver is for night operations. Looking on the waivers that have been issued, we see that no waivers for Operations Over People have been granted yet (as of April 2017).

Note: this list only includes waiver requests, and does not include requests for fly within controlled airspace (such as Class B, Class C, Class D, or Class E from the surface). 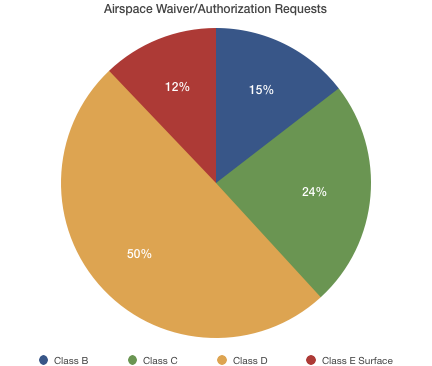 This data shows the breakdown of 6,835 airspace waiver/authorization requests. There is no data depicting the "issue rate" or "denial rate" of these requests.

The vast majority of requests (3,397 of 6,835) are for operations within Class D airspace (i.e. smaller airports with control towers).

What Does This Mean For Your Commercial Operations?

The FAA is slowly approving waiver requests, so you can start planning to do operations that require a special authorization. Currently there is a 90 day window from request to authorization.

To apply for a waiver, you must do so on the FAA website: https://www.faa.gov/uas/request_waiver/

The process is fairly straightforward.

I recently received an authorization for operating in a Class D airspace, which I'll be going over a step-by-step in a future post.

What I learned was how specific you need to be with everything - from the time window of the operations, to the GPS coordinate, to the altitude.

I predict in the future the FAA will streamline the waiver request process to be near instant (not 3 months), but we'll see on that!