How I Drone In '0' Grids At Airports

Over the past several years the process for getting airspace authorizations (approval to perform drone operations in controlled airspace) has gotten easier and easier.

Except directly at airports. That has remained a fairly difficult task to get airspace authorizations, and then even more difficult to perform drone operations.

Before we dive into '0' grids, here's a quick refresher on the state of airspace authorizations today.

The LAANC (Low Altitude Authorization and Notification Capability) is an automated system that allows for Part 107 (and now recreational drone operators) the ability to quickly request and get approvals to operate up to specific altitudes.

The altitudes are specified by the FAA UAS Facility Maps and vary between 0 and 400 feet in controlled airspace. These altitudes are the ceilings in which an operator can fly in with a LAANC automated authorization.

In layman's terms: the FAA has created 1 mile x 1 mile grids in all of the controlled airspace and set an altitude in which you can receive an automatic authorization thru LAANC.

Most of the controlled airspaces in the United States now utilize LAANC (here's a list of them all).

Here's an example of what the LAANC grids look like at the Boise Air Terminal (KBOI) in Idaho. You'll also notice that those grid boxes around the airport are all green. This means it's a LAANC supported airport. 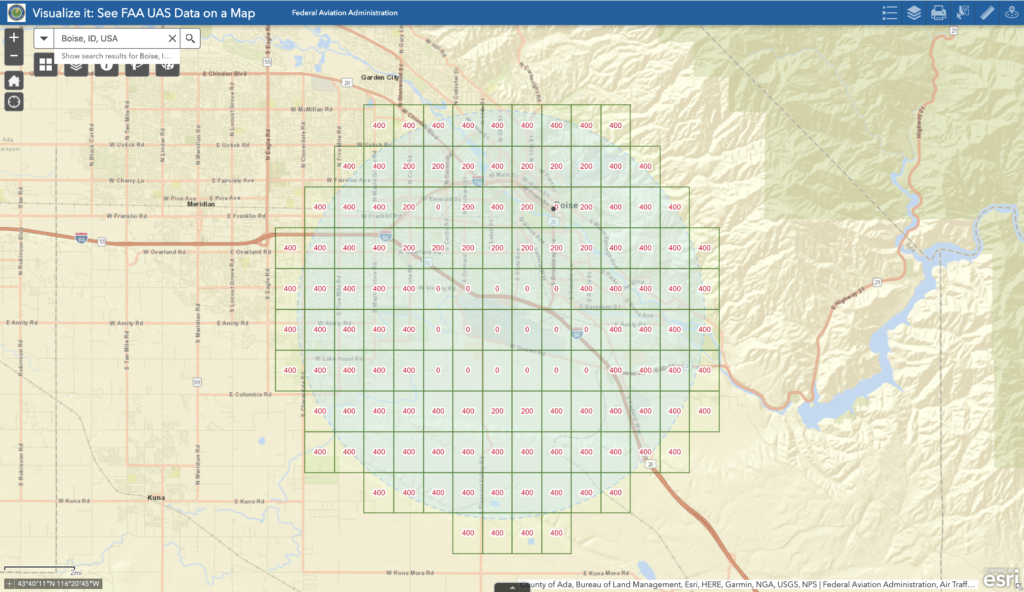 You'll see more '0' grids over the runways, while higher grid ceiling heights of 200 and 400 feet more than 1 mile away.

You can easily request to fly up to to those altitudes with a LAANC provider like Airmap, Skyward, or Kittyhawk. Additionally, you can request to fly above those ceiling numbers (such as to map an area at 400 ft while in a 200 ft grid), however there will be a manual review process and it will not be automatic.

There are airports that do not support LAANC yet, and those are in red. You can see this example here at the Idaho Regional Falls airport (KIDA): 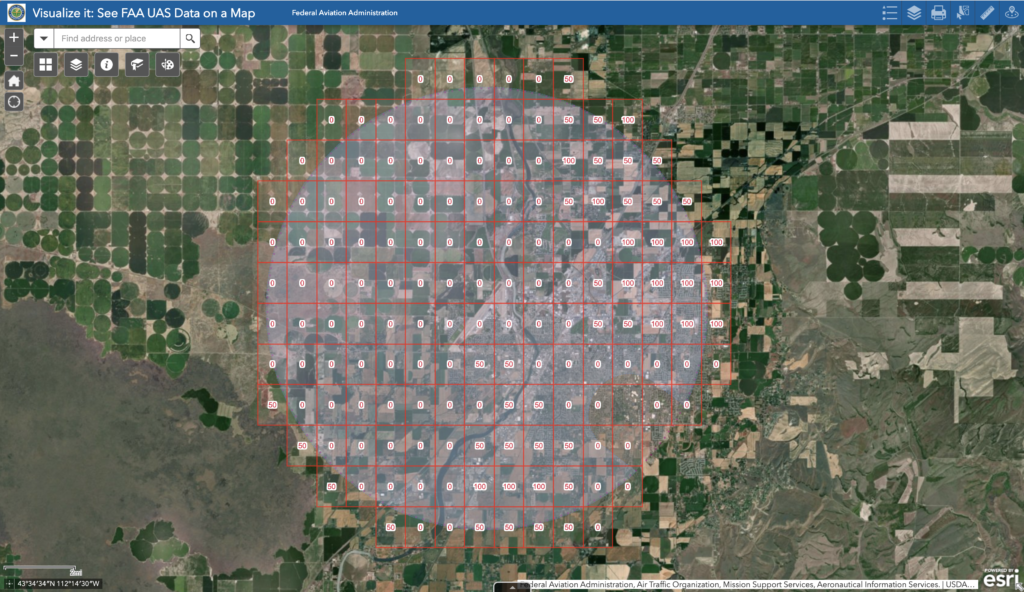 KIDA airspace facility map grid. The grid boxes are red which means it's NOT a LAANC approved airport. You will need to get authorization via the FAA DroneZone to perform any operations.

You're unable to use LAANC to get any authorization at this airspace. Most military airports do not allow for these types of automated authorizations, and require a manual process.

I've used LAANC countless times, but as you can imagine, if you want to fly above those altitude ceilings? How would you go about that?

The FAA DroneZone was the original tool the FAA used for airspace authorization requests before LAANC was rolled out. It's still used for non LAANC airports.

It's with FAA DroneZone that you can also make specific requests to operate above these grid limits. This is how I've gotten my authorizations approved to operate at 400 ft AGL in a '0' grid (adjacent to the runway).

This article is to let you know it's possible to operate in a '0' grid legally, not necessarily provide the exact details on how to do so.

The Process For '0' Grid Authorization

The overall process took around 30 days from my first application to when I was approved to operate.

A recent client owns a lot of land adjacent to a Class D airspace here on Oahu (Hawaii) and needed updated imagery maps. It just so happens that these areas are on or near approach paths for the airspace.

These areas are also large (80-150 acres) with vegetation, so it would be very difficult to map at lower altitudes (the lower the altitude, the more flights it would require).

I determined that operating at 400 ft AGL for the mapping missions was optimial for the imagery, as well as reducing the overall amount of time in the air.

The lower altitude you map at, the higher resolution the imagery, but the longer it would take. Even mapping the same project area at 300 ft instead of 400 ft could be the difference of 6 flights (each at 20 min).

It's much easier to communicate with ATC (air traffic control) that you only have two 20 min flights, instead of eight.

So with the project areas defined, and the desired flight altitudes set, it was time to request for the authorization via FAA DroneZone.

The airport in question was not LAANC approved, so I had to apply via the FAA DroneZone regardless of what altitude I was requesting for.

'I did speak with the FAA recently at a conference and their representative suggested for all '0' grid operations, to apply via the FAA DroneZone (even at LAANC authorized airports).

With FAA DroneZone submittals, it first goes to the regional FAA representative to review and then submit on to the local ATC of that airspace.

Surprisingly, the local ATC called me to have me come in and explain in more details what the operation entailed. Once I did that and we worked out a plan together, they approved the authorization request.

2 weeks later I was flying at 400 ft adjacent to one of their runways performing a mapping mission. By adjacent literally alongside.

Since then, I've performed 5 other operations at 400 ft AGL, all near the airport (and all within the 0 grid). 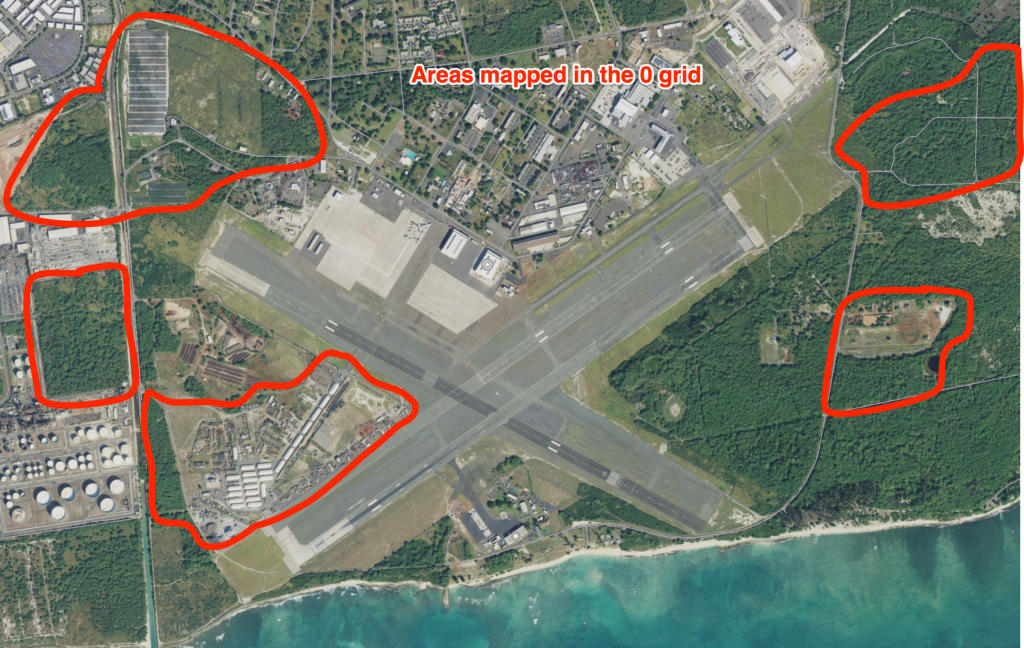 It's exhilarating, but ultimately just a part of the job.