There are two primary types of weather reports a remote pilot will use during sUAS operations: METAR and TAF.

These aviation weather reports are designed to give accurate depictions of current weather conditions. Each report provides current information that is updated at different times.

To view a weather report, go to http://www.aviationweather.gov or https://www.1800wxbrief.com and enter the airport’s 4 letter identifier (such as KJFK or KLAX).

For the Remote Pilot Knowledge Test, you will need to understand how to read and decipher the information from this format (METAR example):

However, when using these reports and forecasts in the “real world”, there will be an option to present this information in a decoded format:

A METAR is an observation of current surface weather reported in a standard international format. METARs are issued on a regularly scheduled basis unless significant weather changes have occurred.

METARs typically come from airports or permanent weather observation stations. Reports are generated once an hour or half-hour, but if conditions change significantly (such as rapidly changing weather conditions, aircraft mishaps, or other critical information), a report known as a special (SPECI) may be issued.

Here are the primary sections on how to read the METAR report:

1. Type of report—there are two types of METAR reports. The first is the routine METAR report that is transmitted on a regular time interval. The second is the aviation selected SPECI. This is a special report that can be given at any time to update the METAR for rapidly changing weather conditions, aircraft mishaps, or other critical information.

2. Station identifier—a four-letter code as established by the International Civil Aviation Organization (ICAO). In the 48 contiguous states, a unique three-letter identifier is preceded by the letter “K.” For example, Gregg County Airport in Longview, Texas, is identified by the letters “KGGG,” K being the country designation and GGG being the airport identifier. In other regions of the world, including Alaska and Hawaii, the first two letters of the four-letter ICAO identifier indicate the region, country, or state. Alaska identifiers always begin with the letters “PA” and Hawaii identifiers always begin with the letters “PH.” Station identifiers can be found by calling the FSS, a NWS office, or by searching various websites such as DUATS and NOAA's Aviation Weather Aviation Digital Data Services (ADDS).

3. Date and time of report—depicted in a six-digit group (071753Z). The first two digits are the date. The last four digits are the time of the METAR/SPECI, which is always given in coordinated universal time (UTC). A “Z” is appended to the end of the time to denote the time is given in Zulu time (UTC) as opposed to local time.

4. Modifier—denotes that the METAR/SPECI came from an automated source or that the report was corrected. If the notation “AUTO” is listed in the METAR/SPECI, the report came from an automated source. It also lists “AO1” (for no precipitation discriminator) or “AO2” (with precipitation discriminator) in the “Remarks” section to indicate the type of precipitation sensors employed at the automated station. When the modifier “COR” is used, it identifies a corrected report sent out to replace an earlier report that contained an error (for example: METAR PHNL 071753Z COR).

8. Sky condition—always reported in the sequence of amount, height, and type or indefinite ceiling/height (vertical visibility) (BKN008 OVC012CB, VV003). The heights of the cloud bases are reported with a three-digit number in hundreds of feet AGL. Clouds above 12,000 feet are not detected or reported by an automated station. The types of clouds, specifically towering cumulus (TCU) or cumulonimbus (CB) clouds, are reported with their height. Contractions are used to describe the amount of cloud coverage and obscuring phenomena. The amount of sky coverage is reported in eighths of the sky from horizon to horizon. [Figure 13-6]

10. Altimeter setting—reported as inches of mercury ("Hg) in a four-digit number group (A2970). It is always preceded by the letter “A.” Rising or falling pressure may also be denoted in the “Remarks” sections as “PRESRR” or “PRESFR,” respectively.

11. Zulu time—a term used in aviation for UTC, which places the entire world on one time standard.

12. Remarks— the remarks sectional ways begins with the letters “RMK.” Comments may or may not appear in this section of the METAR. The information contained in this section may include wind data, variable visibility, beginning and ending times of particular phenomenon, pressure information, and various other information deemed necessary. An example of a remark regarding weather phenomenon that does not fit in any other category would be: OCNL LTGICCG. This translates as occasional lightning in the clouds and from cloud to ground. Automated stations also use the remarks section to indicate the equipment needs maintenance.

A TAF is a report established for the five statute mile radius around an airport. TAF reports are usually given for larger airports. Each TAF is valid for a 24 or 30-hour time period and is updated four times a day at 0000Z, 0600Z, 1200Z, and 1800Z. The TAF utilizes the same descriptors and abbreviations as used in the METAR report. 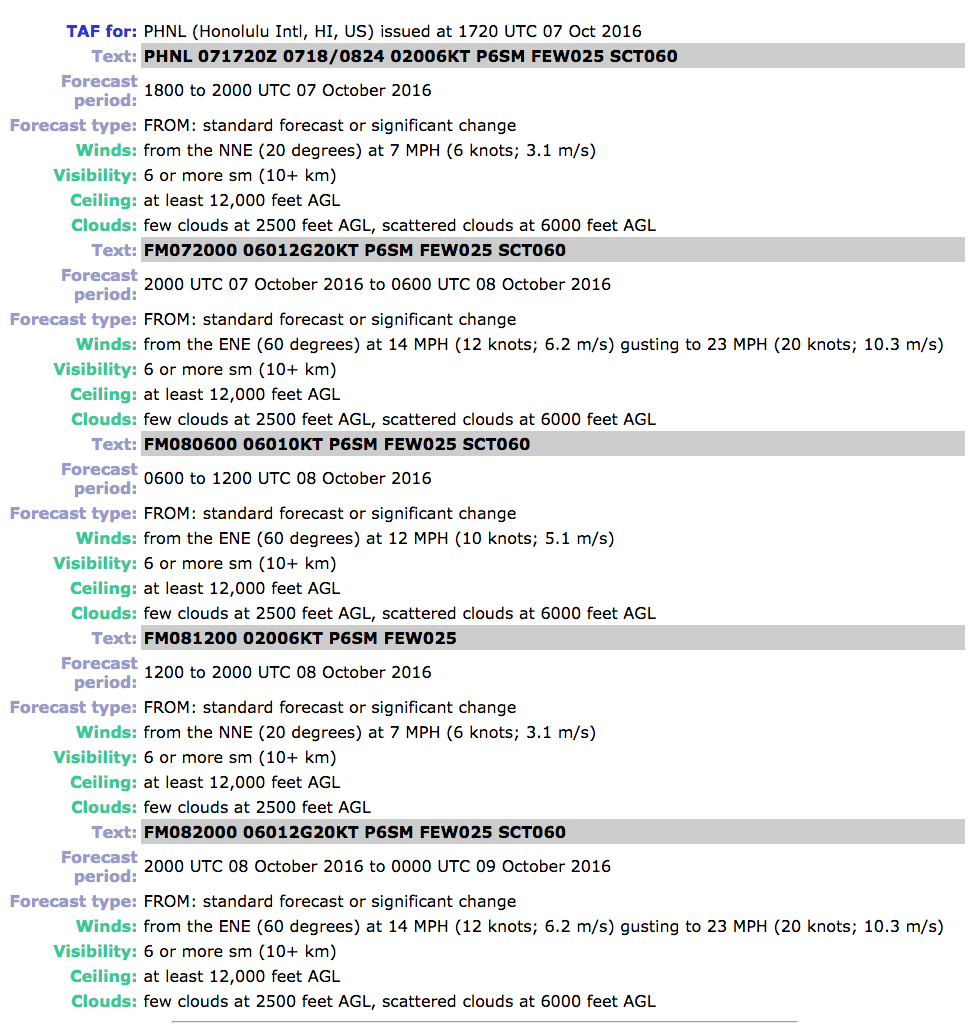 Key to METARs and TAFs 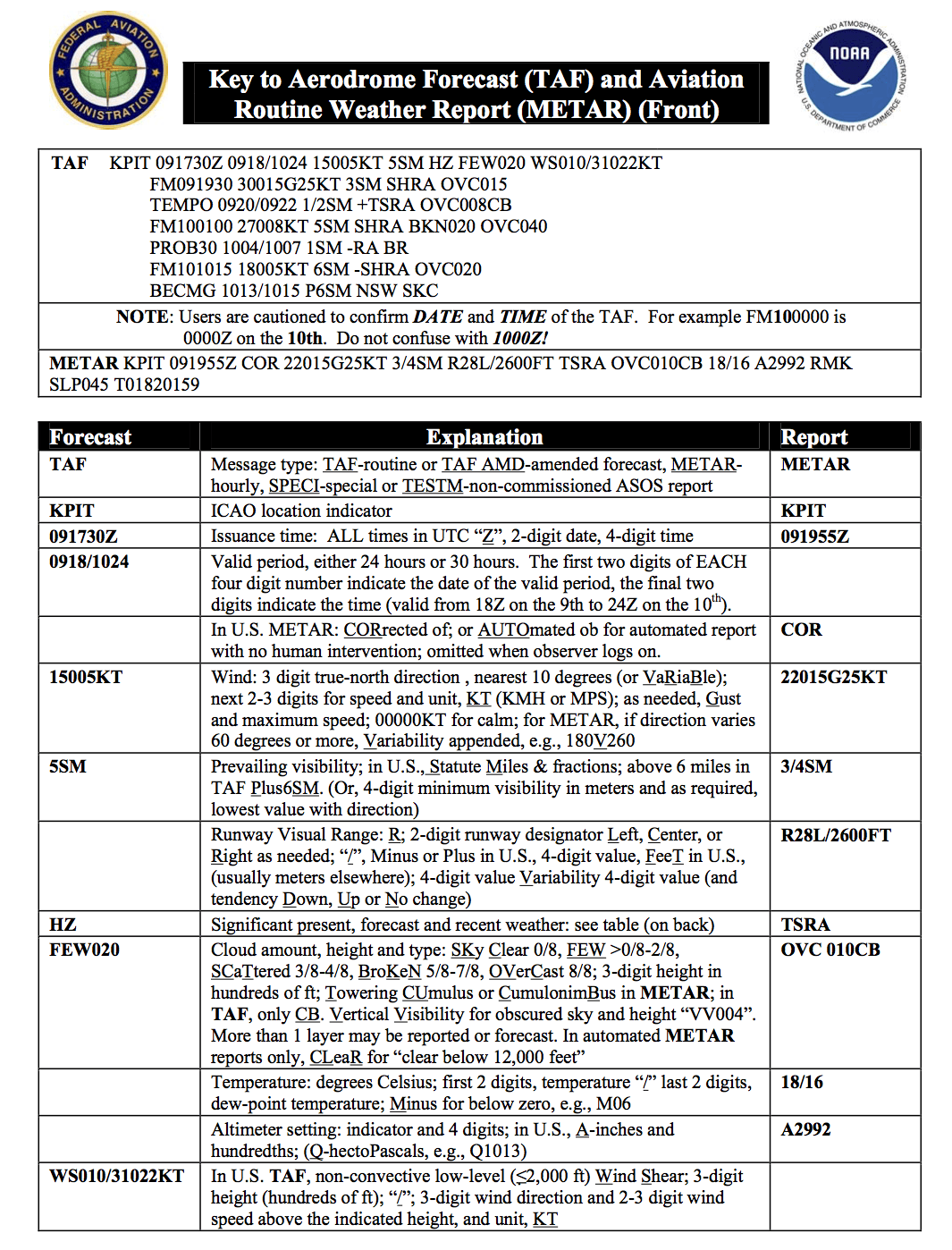 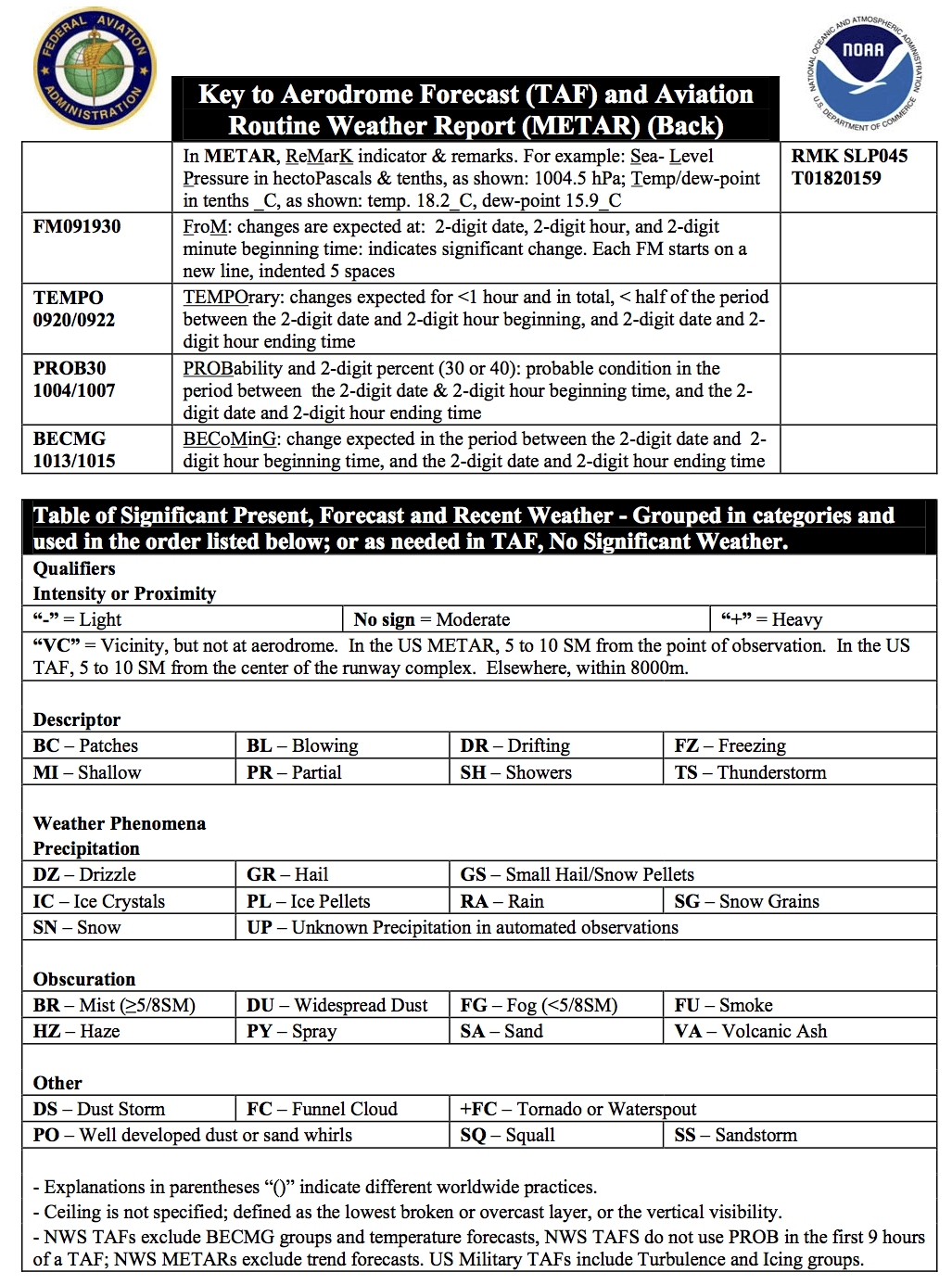