Airspace is one of the most important (and difficult sections) to master for your remote pilot knowledge test. It's also VERY important for real world commercial drone operations.

The FAA has divided and classified all of the vertical space, from just above the ground to 18,000 feet and higher.

The different classes of airspace help drone pilots to understand whether airplanes or other vehicles might be occupying the same airspace us. Understanding the types of airspace and the rules that apply helps us to avoid interfering with any other aircraft.

For drone pilots, the airspace we are most interested in is between 0 to 400 feet above ground level (AGL). sUAVs are not permitted to fly above 400 feet AGL (however a pilot may perform sUAS operations above this elevation with a waiver under 14 CFR Part 107).

Use this video, along with the rest of this article to help learn and understand airspace for the remote pilot knowledge test. 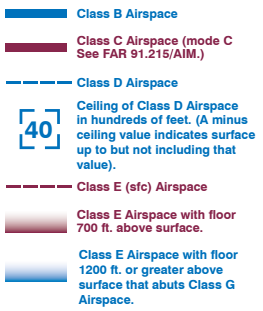 Class A Airspace
Class A airspace is generally the airspace from 18,000 feet mean sea level (MSL) up to and including flight level (FL) 600, including the airspace overlying the waters within 12 nautical miles (NM) of the coast of the 48 contiguous states and Alaska. This airspace is a non-factor for sUAS operations.

Class B Airspace
Class B airspace is generally airspace from the surface to 10,000 feet MSL surrounding the nation’s busiest airports in terms of airport operations or passenger enplanements. The configuration of each Class B airspace area is individually tailored, consists of a surface area and two or more layers (some Class B airspace areas resemble upside-down wedding cakes), and is designed to contain all published instrument procedures once an aircraft enters the airspace. ATC clearance is required for all aircraft to operate in the area, and all aircraft that are so cleared receive separation services within the airspace.

ATC Authorization is required for sUAS operations in Class B Airspace.

Class C Airspace
Class C airspace is generally airspace from the surface to 4,000 feet above the airport elevation (charted in MSL). Although the configuration of each Class C area is individually tailored, the airspace usually consists of a surface area with a five NM radius, an outer circle with a ten NM radius that extends from 1,200 feet to 4,000 feet above the airport elevation.

Class D Airspace
Class D airspace is generally airspace from the surface to 2,500 feet above the airport elevation (charted in MSL). ATC Authorization is required for sUAS operations in Class D Airspace.

In many other areas, the Class E airspace base is either the surface or 700 feet AGL.

Some Class E airspace begins at an MSL altitude depicted on the charts, instead of an AGL altitude.

Class E airspace typically extends up to, but not including, 18,000 feet MSL (the lower limit of Class A airspace).

ATC Authorization is only required for Class E airspace from the surface to 700 feet AGL.

No ATC Authorization is required for Class E airspace above 700 feet AGL.

The special use airspace depicted on instrument charts includes the area name or number, effective altitude, time and weather conditions of operation, the controlling agency, and the chart panel location. On National Aeronautical Charting Group (NACG) en route charts, this information is available on one of the end panels. Special use airspace usually consists of: 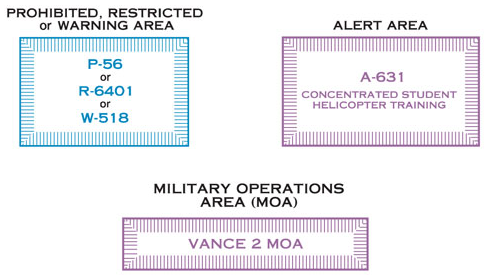 Prohibited Areas
Prohibited areas contain airspace of defined dimensions within which the flight of aircraft is prohibited. Such areas are established for security or other reasons associated with the national welfare. These areas are published in the Federal Register and are depicted on aeronautical charts. The area is charted as a “P” followed by a number (e.g., P-40). Examples of prohibited areas include Camp David and the National Mall in Washington, D.C., where the White House and the Congressional buildings are located.
Warning Areas
Warning areas are similar in nature to restricted areas; however, the United States government does not have sole jurisdiction over the airspace. A warning area is airspace of defined dimensions, extending from 3 NM outward from the coast of the United States, containing activity that may be hazardous to nonparticipating aircraft. The purpose of such areas is to warn nonparticipating pilots of the potential danger. A warning area may be located over domestic or international waters or both. The airspace is designated with a “W” followed by a number (e.g., W-237).

Military Operation Areas (MOAs)
MOAs consist of airspace with defined vertical and lateral limits established for the purpose of separating certain military training activities from IFR traffic. Whenever an MOA is being used, nonparticipating IFR traffic may be cleared through an MOA if IFR separation can be provided by ATC. Otherwise, ATC reroutes or restricts nonparticipating IFR traffic. MOAs are depicted on sectional, VFR terminal area, and en route low altitude charts and are not numbered (e.g., “Camden Ridge MOA”). However, the MOA is also further defined on the back of the sectional charts with times of operation, altitudes affected, and the controlling agency.

Alert Areas
Alert areas are depicted on aeronautical charts with an “A” followed by a number (e.g., A-211) to inform nonparticipating pilots of areas that may contain a high volume of pilot training or an unusual type of aerial activity. Pilots should exercise caution in alert areas. All activity within an alert area shall be conducted in accordance with regulations, without waiver, and pilots of participating aircraft, as well as pilots transiting the area, shall be equally responsible for collision avoidance.

Controlled Firing Areas (CFAs)
CFAs contain activities that, if not conducted in a controlled environment, could be hazardous to nonparticipating aircraft. The difference between CFAs and other special use airspace is that activities must be suspended when a spotter aircraft, radar, or ground lookout position indicates an aircraft might be approaching the area. There is no need to chart CFAs since they do not cause a nonparticipating aircraft to change its flight path.

Other Airspace Areas
“Other airspace areas” is a general term referring to the majority of the remaining airspace. It includes:

ATC Authorization cannot be requested on the radio or phone, this request must be done online through the waiver application form on the FAA website.

A flight data center (FDC) Notice to Airmen (NOTAM) is issued to designate a TFR. The NOTAM begins with the phrase “FLIGHT RESTRICTIONS” followed by the location of the temporary restriction, effective time period, area defined in statute miles, and altitudes affected.

The NOTAM also contains the FAA coordination facility and telephone number, the reason for the restriction, and any other information deemed appropriate. The pilot should check the NOTAMs as part of flight planning.

Some of the purposes for establishing a TFR are:

It is a pilot’s responsibility to be aware of TFRs in their proposed area of flight. One way to check is to visit the FAA website, www.tfr.faa.gov, and verify that there is not a TFR in the area.